Johan Cruijff (full name Hendrik Johannes Cruijff) was born on April 25th in Amsterdam East. He lived with his father Manus and mother Nel. They owned a greengrocers close to the old De Meer stadium. Johan´s nickname was Jopie. He was a skinny boy, but the kids he played street football with were unable to stop him. He possessed unbelievable technique at a young age, a magician on the ball.  Developing his attributes to an incredibly high level with hours of practice. Perhaps the difference between Johan and the stars of today is that Cruijff was also Ajax through and through.  Enjoying access to the stadium as a boy thanks to his mother who worked as a cook in the stadium canteen.

After his formative years, Cruijff leaves comprehensive school as a youngster and starts working in a sportshop and later in a textile store. Tragically his father died of a heart attack when he was just 45 years old and Johan takes it upon himself to support his mother.

A 10-year old Johan receives a letter from Ajax inviting him to become a football player. In fact, he was already training there for 4 years. Johan has pace to burn and speed of thought that is unparalleled. His amazing skills even see older players trying to imitate his repertoire of tricks. He is a born leader, with confidence to match, and he informs his teammates, some of which are significantly older, how to play the game his way. Johan Cruijff signed his first youth contract at only  16 years of age. Total football is born.

2. Johan Cruijff as a football player for Ajax Amsterdam

Johan makes his official debut in the Dutch league on November 15th 1964. He nets one goal in the away match against GVAV in Groningen, but is unable to prevent Ajax losing the game 1-3. In 1965 Johan Cruijff signs his first full-time professional contract after typically tough negotiations.

In 1970-1971, Cruijff scores an incredible six goals in one match against Sparta. Only Dutch striker Marco van Basten equals this record many years later.

In November 1971, Cruijff unbelievably scores after only nine seconds against Dutch side Telstar. This remains his fastest goal ever.

In 1972 Cruijff writes history: Ajax win the biggest competition victory ever, a 12-1 thumping of Vitesse. Cruijff scores 4 times in this whitewash of a match.

Cruyff plays his last Ajax match on 19th August 1973. It is a memorable occasion as Johan scores as they defeat FC Amsterdam  6-1. He leaves the pitch to a rapturous and emotional reception.

Cruyff plays his first European Cup match at the tender age of 19 years old. He leads Ajax to a 2-0 victory over Turkish club Besikitas. Later that year (1966) in the old Olympic Stadium, history is made again as Ajax defeat Liverpool  5 – 1, Liverpool ´s biggest defeat in a European competition. The game was played in thick fog, with spectators barely able to see the other side of the pitch.

In February 1969, Ajax defeat Benfica 3-1 in the second leg in Portugal with two Cruyff goals saving the Amsterdam club following defeat in Amsterdam. Back then, Benfica were one of the top sides in Europe.  In the replay in Paris, Ajax wins with a Cruyff goal in extra time and reach the final of the European Cup . The final is against AC Milan in Madrid, where Ajax eventually lose 4-1.

In 1971 Ajax write history again. Inspired by Cruyff, Ajax scoop the European Cup for the first time, with the final in London’s Wembley stadium as Ajax defeat Panathinaikos : 2-0.

The following year, 1972, Ajax take home the European Cup once more. This time, Ajax beat Inter Milan 2-0 with both goals coming from Cruyff.

Johan Cruyff is named Ajax captain. Typically, Johan remains unfazed by the fact that not all his team mates concur.

1973 sees another classic Johan-inspired match: Ajax-Juventus. For the third time in a row, Ajax win the European Cup, beating the Italians 1-0 thanks to a goal from right winger Johnny Rep in Belgrade.

With Cruyff as the captain of the Dutch national team, they make it to the final of the World Cup in 1974 in Germany. Cruyff scores against Germany, but ultimately Oranje lose the final 2-1.

The tournament however ends on a high note for Amsterdam’s most famous football son. Voted to be best soccer player of the tournament and subsequently also best European football player. His status as a true legend is now irrevocable.

He brings down the curtain on his Oranje career early in 1977, citing an unwillingness to be away from his family (wife Danny and three young  children) for six weeks during the World Cup in 1978 in Argentina.

In total, Cruyff plays 48 matches for the Dutch national team and is good for 33 goals. 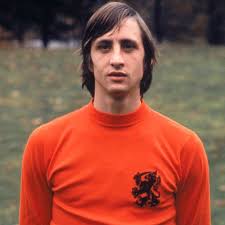 22nd August 1973: Cruyff signs a contract with FC Barcelona for 6 million Dutch guilders (about 2.7 million euros) which is a new international money transfer record. In Barcelona he was given the nickname El Salvador or El Flaco.

Cruyff´s last European Cup match for Barcelona is in 1978, an announcement that is felt throughout the football world. 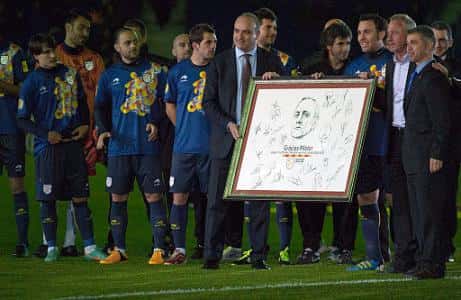 Cruijff decides to return to playing soccer again due to financial reasons in 1979. He signs for Los Angeles Aztecs in the US and is voted most valuable player that year.

Cruyff makes the switch to Washington Diplomats in 1980/1981, four matches for DS’79 in Holland in between, then approximately four months at Levante in Spain.

The next year Cruyff leaves Ajax for fierce rivals Feyenoord from Rotterdam. He wanted to make a statement to Ton Harmsen (former Ajax chairman) after the club failed to reach contractual agreements with the player for an additional year of his services.

Inspired by Cruijff, Feyenoord become champions in 1983/1984. Cruyff’s heaviest defeat comes in a Feyenoord shirt, as Ajax destroy the Rotterdammers 8-2.

After his Rotterdam adventure, Johan returns to Ajax in 1985 as a trainer but without the mandatory KNVB (Dutch Football Association) official trainer´s certificate. He is granted special dispensation to manage without a certificate.

Johan leads Ajax to glory in the UEFA Cup over Lokomotive Leipzig in 1987 (1-0), becoming the first Dutch club to do so. He leaves Ajax in early 1988 due to differences between others players (e.g. Frank Rijkaard).

In June 1988 he leaves Ajax for FC Barcelona to become trainer, together with Tonnie Bruins Slot. Barcelona immediately win the UEFA Cup.

20th May 1992: with Johan at the helm, FC Barcelona are crowned champions of the European Cup for the first time in their history.

A barren season at FC Barcelona in 1995 sees Johan fired a year later. However, the revered Dutchman goes down in history as the trainer to manage Barcelona the longest in the post-war period (2936 days).