The Amsterdam Arena was renamed the Johan Cruijff Arena this year. This was following the Dutch football superstar’s untimely death in 2017. The official renaming day was April 25th, Johan´s birthday. As a mark of respect to Holland’s best soccer player of all time, they used the Dutch spelling of Cruijff, instead of the international of spelling Cruyff. The Amsterdam Arena was originally opened back in August 1996 by the then Queen of the Netherlands, Beatrix. Since that time, the venue has been the home of Ajax Amsterdam football club. The Dutch National team also uses the Johan Cruijff Arena for matches. In addition to sport, there are also regular concerts and music events such as Sensation and a show by the world’s number one DJ, Armin van Buuren.

The stadium holds more than 54,000 seats and is the biggest stadium in the Netherlands currently. The height of the stadium is 78 meters and it is the first stadium in Europe with a sliding roof.

The Johan Cruijff Arena is a sustainable stadium. On the roof there are approximately 4,200 solar panels. Cleaning the stadium takes about 550 hours, and there are roughly 500 stewards at work during football matches. The weight of the stadium is approximately 150,000 tons and the entire structure rests on 1650 piles under the ground. There are 17,500 parking spaces available around the stadium.

Inside the stadium, the steps have been designed extra steep to allow every seat in the house to have an outstanding view of the pitch. There are no restricted views in the stadium. There are two big screens of 65m2 showing the action and roughly 115 cameras for safety reasons. The stadium also has 300 TVs inside the concourses. 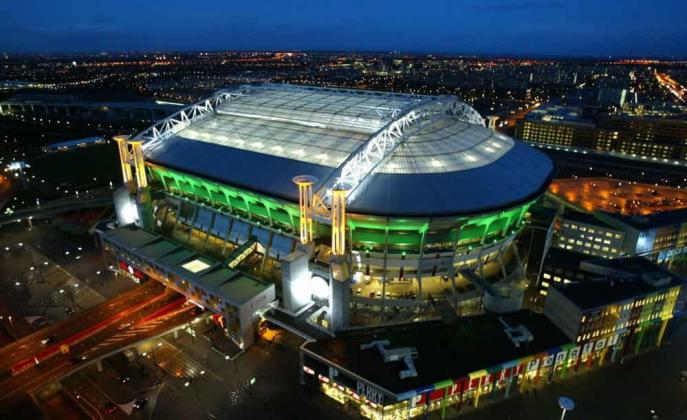 The first pop music artist to perform in the stadium was Tina Turner and many reputable performers followed such as The Rolling Stones, Madonna, Eminen, George Michael, Celine Dion, Beyoncé and Jay-Z.

Best bike tour in the City:

Book the Johan Cruijff Bike Tour with us today and we will proudly show you the true roots of Dutch legend Johan Cruijff. Discover where he was born, where he lived, where he learned to play football on the streets and much more. Feel the vibes of Holland’s best ever footballer, a man who is synonymous with the beautiful game. A true Dutch icon famous all over the world and accredited with spawning the way the mighty Barcelona play today. Feel the vibes of the stadium after visiting Johan’s roots by bike.